Once upon a time, there was a happy family; my family. Loving parents and two sweet little girls. Then, in 1996, a third child came to our lives, our long waited for son. We felt totally complete. How couldn’t we? Life was good and kind. My husband and I had been given the greatest gift of all – three healthy children.

It’s funny how new parents use to announce the birth of their baby: “a healthy boy’, “a healthy girl”. However, how healthy are they, really? My beautiful son was strong, physically in good health, but what we didn’t know at his birth: he wasn’t neurologically wholesome. Edinho had autism.
My first worries started when my son was  1,5 years. His behavior was absolutely different than my girl’s at the same age:

– He didn’t play with toys

– He didn’t eat most kind of foods

– He didn’t answer when we called out his name

My beautiful son just wouldn’t listen. When he turned two I was as sure as a mother can be, that he had autism.

As if it wasn’t hard enough, I had to convince our physician that this was the reason my son’s development seemed so compromised.

It wasn’t until he was about to turn three that we finally had a diagnosis: severe autism with a possible mental retardation. I won’t lose any time telling you how devastated I was. I still don’t know if the fact it was indeed autism was harder to take than the cold way the news were told to us.

_ “Take into consideration that your son, most probably, will have to grow up in an institution for severely autistic children”, said the psychiatrist.

And there we were, my husband and I, trying to digest the news that our little, gorgeous boy had the most impaired type of autism.

My world stopped for a while. The earth might as well have been taken from under my feet. I’ve cried, I’ve sobbed; I asked myself all those questions we, autism mothers, mostly, ask at this period after the diagnose: “why me?” “ why us?” why my son?”… Yes, I spent a little time feeling sorry for myself. I did it and I don’t regret it. I needed it. Then, I left my sorrow behind and went ahead, to fight the invisible, big monster called autism.

My first question was “what can I do for my son to make him as happy as he can be, regardless his condition?”. A difficult question to answer indeed.

Back to the beginning of the 21th century, the internet was just getting started. Information on autism wasn’t easy to get. People joke that “an autism mother does more research than the F.B.I”… yes, it’s true. At least,

that’s pretty much what I did. If I wanted to defeat autism, I had to know everything about it.

The following years were devoted to personal research. I was searching for information, for ways to help my child to be the best he could be. And I’ve found it.

Edinho used to be the “worst” autistic kid from any group. You know, the one who doesn’t speak, who doesn’t connect socially, who doesn’t react to his name, who seems to live in his own world. That was my son. Not anymore. My boy is now 20 years old. He attends a technical course in Basics Commercial Administration. He is friendly, empathic, charming even. He is unrecognizable to most people who knew him as a child. Still, I know he is not a miracle. There is no miracle in the 18 years our family decided not to give in to statistics and faced the challenge brought to us. We chose to embrace autism. We chose to accept it, but not without giving up the hope to see our son blossoms. Whatever may have happened, it would’ve been okay. I would never, ever quit loving my boy to the moon and back, anyways. I had nothing to lose. I had a lot to gain, even when I didn’t know it back then.

Yet, I don’t think we were lucky. I think we were positive, focused and disciplined. Most of all, we accepted our son within our hearts, without expecting him to be ‘normal’.

In this journey our family found out a couple of important things:

We, parents of challenged children, have to keep fighting for what we believe in, even if the whole world thinks we’re crazy. Professionals ought to listen to us more often, including us as an unmissable resource in the development our children. Those specialists must not tell a parent who is just starting to deal with autism, what his or her child won’t achieve. It’s not their right to take away our hope.

Experience has shown me that the only certainty about autism is that there is absolutely no certainty about autism. Theories once embraced as “the one” method to treat the syndrome are being contested. At the same time, not scientifically proven therapies (and therefore criticized by many therapists) have been acknowledged.

If with regards to autism nothing is what it seems/sounds/talks/acts, why not to give hope to parents from the start?

My son is doing great and getting prepared for an independent life. To overcome autism, we have to overcome our own fears and insecurities, first of all. Let’s start by believing that everything is possible. 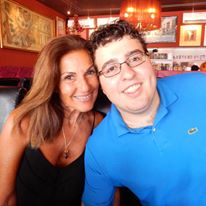