Autism spectrum disorder (ASD) and autism are both general terms for a group of complex disorders of brain development. These disorders are characterized, in varying degrees, by difficulties in social interaction, verbal and nonverbal communication and repetitive behaviors. With the May 2013 publication of the DSM-5 diagnostic manual, all autism disorders were merged into one umbrella diagnosis of ASD. Previously, they were recognized as distinct subtypes, including autistic disorder, childhood disintegrative disorder, pervasive developmental disorder-not otherwise specified (PDD-NOS) and Asperger syndrome.

Having said that Autimates prefers to perceive Autism as a Difference instead of a Disorder. ASD will mean, her at Autimates, as an Autism Spectrum Difference.

ASD can be associated with intellectual disability, difficulties in motor coordination and attention and physical health issues such as sleep and gastrointestinal disturbances. Some persons with ASD excel in visual skills, music, math and art.

Autism appears to have its roots in very early brain development. However, the most obvious signs of autism and symptoms of autism tend to emerge between 2 and 3 years of age. Autism Speaks continues to fund research on effective methods for earlier diagnosis, as early intervention with proven behavioral therapies can improve outcomes. Increasing autism awareness is a key aspect of this work and one in which our families and volunteers play an invaluable role.

The autistic spectrum or autistic spectrum describes a range of conditions classified as neurodevelopmental disorders in the fifth revision of the American Psychiatric Association’s Diagnostic and Statistical Manual of Mental Disorders 5th edition (DSM-5).The DSM-5, published in 2013, redefined the autism spectrum to encompass the previous (DSM-IV-TR)) diagnoses of autism, Asperger syndrome, a pervarsive developmental disorder not otherwise specified (PDD-NOS), childhood disintegrative disorder, and Rett syndrome. All of them disorders are characterized by social deficits and communication difficulties, stereotyped or repetitive behaviors and interests, and in some cases, cognitive delays.

The opinions about the new classification of the autism spectrum are quite divided. There is a huge part of the Asperger communities that disagree with the withdrawal of the syndrome from the manual.

Autism spectrum disorder (ASD) is a developmental disability that can cause significant social, communication and behavioral challenges. There is often nothing about how people with ASD look that sets them apart from other people, but people with ASD may communicate, interact, behave, and learn in ways that are different from most other people. The learning, thinking, and problem-solving abilities of people with ASD can range from gifted to severely challenged. Some people with ASD need a lot of help in their daily lives; others need less.

The importance of recognizing the early signs of autism and seeking early intervention services. Recent research confirms that appropriate screening can determine whether a child is at risk for autism as young as one year. While every child develops differently, we also know that early treatment improves outcomes, often dramatically. Studies show, for example, that early intensive behavioral intervention improves learning, communication, and social skills in young children with autism spectrum disorders (ASD).

One of the most important things you can do as a parent or caregiver is to learn the early signs of autism and become familiar with the typical developmental milestones that your child should be reaching.

The following “red flags” may indicate your child is at risk for an autism spectrum disorder. If your child exhibits any of the following, please don’t delay in asking your pediatrician or family doctor for an evaluation:

If you think your child might have ASD or you think there could be a problem with the way your child plays, learns, speaks, or acts, contact your child’s doctor, and share your concerns.

There is currently no cure for ASD. However, research shows that early intervention treatment services can improve a child’s development. Early intervention services help children from birth to 3 years old (36 months) learn important skills. Services can include therapy to help the child talk, walk, and interact with others. Therefore, it is important to talk to your child’s doctor as soon as possible if you think your child has ASD or other developmental problem.

Even if your child has not been diagnosed with an ASD, he or she may be eligible for early intervention treatment services.

The different types of treatments can generally be broken down into the following categories:

We do not know all of the causes of ASD. However, we have learned that there are likely many causes for multiple types of ASD. There may be many different factors that make a child more likely to have an ASD, including environmental, biologic and genetic factors.

Autimates hopes that specialists involved in the diagnosis of someone autistic provide the family not only a list of his or her limitations but especially, a list of the possibilities autistic people have. 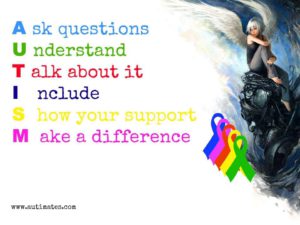