Many people with ASD complain about not being heard. Worldwide there are a vast amount of autism platforms, mostly run by autism parents and professionals. Although those are unmissable to autism advocacy, so are the ones on the spectrum – people with ASD.
Therefore, Autimates offers a place for them to say what they want, what they think, and how they feel about many aspects of life with autism.

Today’s interview is with Marcos Petry, from Santa Catarina, Brazil.
Marcos is a High Functioning Autistic. He graduated in Institutional Communication at the UNIDAVI University in 2014, and got his Master’s degree in Graphic Design & Publicity Production a year later. Since 2016 Marcos has been (self)advocating through his Youtube channel Diario de um Autista  (Diary of an Autistic) which resulted in many invitations to lecture as far as Overcoming difficulties, and possibilities inside autism.
In 2016, Marcos wrote the book Contos de Meninos e Meninas, Contos de Homens e Mulheres (Tales of Boys and Girls, Tales of Men and Women.) The gifted young man says that, besides writing, music also feels to him as a safe harbor for containing the same priorities as writing: rhythm, sense, and the possibility to reflexion.

Autimates: Do you prefer to be called autistic or person with autism?

M.P.: I prefer to be called an Autistic Person because such condition makes part of myself. It is not a thing apart, so I consider not “to have” autism, but “to be” an autistic person.

Autimates: What made you search for a diagnosis? And how did it influence your life?

M.P.: A friend of our family who studied disabilities, noticed a handful of limitations in me. Mostly in the issues of interacting, and exploring the environment, so she said it could be autism. My family went in search of such condition. Saw many doctors but never had an accurate diagnosis. I only got it at the age of nine! So we lost great opportunities to develop sociability. As I have a brain injury, I ended up developing minimum abilities to be independent via The Glenn Doman Method which consists of sending stimuli to the brain, so that it may develop within neurotypical patterns. This was part of rehab, which I took from an early age! So I say I have noticed a little impact on daily living. Actually, I suit most situations fine! Nowadays, I seek to study autism in order to understand myself better every day, as well as to help other autistic people to understand themselves. That’s what I do through the contents of my YT-channel ‘The Diary of an Autistic.”

Autimates: What are the most difficulties you find as an autistic person in a neurotypically thinking world?

M.P.: The most problems I recognize in a neurotypical world are: The lack of explanation on everyday live rites. Example: “Why do I have to greet people so often, once I’ve already acknowledged their presence ” Or ” Why do I have to change clothes? The clothing I wear feels so comfortable ” There is also a problem with pace: ” why do people speed up their rhythm of speaking? ” “why does anyone speak so loud? “

Autimates: Name an autism myth you would like to see erased?

M.P.: I would like to see the myth of “Autistic geniuses ” cleared! Not all autistic people are Geniuses. In fact, less than 1 percent of them do.

Autimates: What do you think society can do to help you improve your life (and that of your children)?

M.P.: I think society needs to be aware of the matter of PEACE. Everything has to be informed to an autistic person before it happens. If people learn how to be a bit more delicate and caring about autism, then it is a good start for the autonomy of autistics.

Autimates: How do you think you or other ASD people can help a neurotypical society?

Autimates: Is there anything you would like to tell people, regarding autism?

M.P.: I would like to tell people on Product development area that many times, autistics have problems with design and usability I’d say: Please, develop something pretty straightforward rather than a multitude of colors, shapes, angles…. Amongst many design options, to whatever product you think of. From silverware to cars, autistics feel completely lost! So please create something objective, let the product tell me what to do with it. How to use it. Autistics are objective! 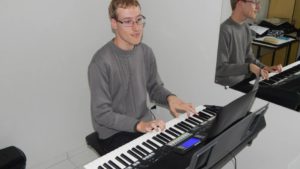